by Held In Scorn 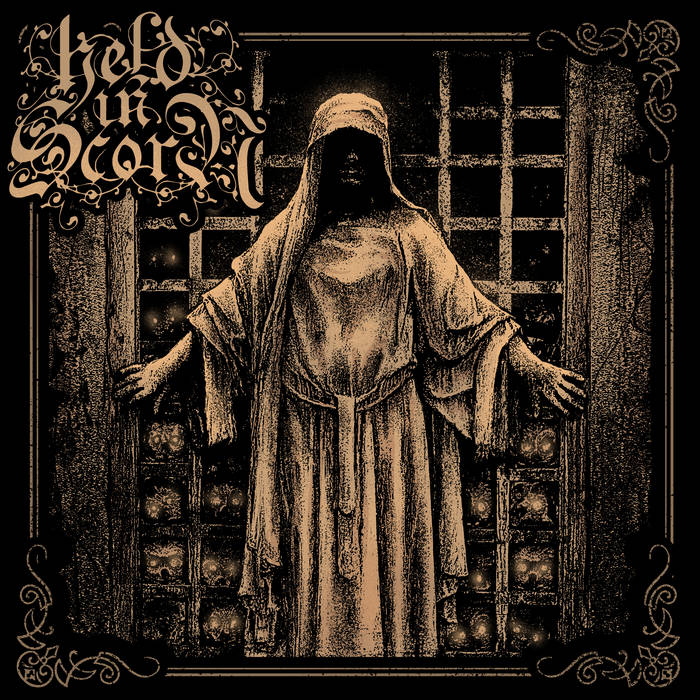 The idea for HELD IN SCORN (HIS) was born during the Winter of 2002 in Stockton, CA on the now-defunct message forum for the regional underground metal website Powerslave.com. Influenced by such bands as In Flames, At The Gates, Satyricon, as well as local acts SIN and Winter Reign, the band wanted to bring melodic death metal to the region in lieu of the ever-growing pop-punk/nu-metal movement of the early 2000s.

Guitarist Ray Marquez posted an ad in the Musician’s Wanted section of the Powerslave forums and one of the first replies was from vocalist Derrick Scott (drummer at the time for Stockton hardcore band Setrip) who was looking to start a melodic death metal outfit as a vocalist. The first jam session was hosted at the “Sheds”.

The “Sheds” were a colony of storage units inhabited by local bands at the A-1 U-Stor located off the 99 freeway in South Stockton. This was to be the home of both Setrip and Held In Scorn. After a few jam sessions, the lineup started to come together. Phillip Pathoumnorack on the bass, guitarist Mike Butler (of Stockton grindcore band DeadEyedStare), and Mike Chavez on drums. Both Butler and Chavez left the project relatively early and were replaced by Matt Young and Hobart Thomas respectively. This was the core line-up going forward and the band started writing.

HIS cut a 6-song split album with Setrip titled Fight Til Death!: Held In Scorn vs Setrip in the Fall of 2003 with acclaimed producer/engineer Zack Ohren of Castle Ultimate Studios who had already helmed albums for such acts as All Shall Perish, Animosity, and Light This City. Another 3-track EP was completed in 2004.

Hobart and Ray eventually parted ways with the band shortly after the 2nd session. Ray went on to form The Final Cadence with Matt on drums (who was still actively in HIS at the time) and Held In Scorn got some new artillery in drummer Thomas Brouns (who went on to a substantially better gig post-Held In Scorn with the Eddie Hermida-fronted Gunmetal Grey) and guitarist Jason Miguel who previously spent time in regional black metal band Disharmony. Held In Scorn again entered Castle Ultimate Studios in 2005 to drop another 4 tracks, this time with Castle Ultimate’s Aaron Hellam at the board.

HIS played regional shows but eventually called it quits around 2006, digitally distributing the Castle Ultimate sessions on Bandcamp in 2012. In the Spring of 2018, the session tracks were remastered by HIS guitarist Matt Young at his Press Recording Studio in Stockton, CA. HIS released the 3-track Rusted Gates EP on June 1st, 2018 on major digital distribution stores as well as offering a limited slim CD jewel case on their official Bandcamp site.

HIS self-titled debut album will be released Halloween 2018.

Tracks 1-3 produced by Held In Scorn. Engineered, mixed, and mastered by Zack Ohren at Castle Ultimate Studios in Oakland, CA Autumn of 2003.

Tracks 4-6 produced by Held In Scorn. Engineered, mixed, and mastered by Zack Ohren at Castle Ultimate Studios in Oakland, CA Summer of 2004.

Tracks 7-10 produced by Held In Scorn. Engineered, mixed, and mastered by Aaron Hellam at Castle Ultimate Studios in Oakland, CA Summer of 2005.

Thanks to:
Aaron Hellam & Zack Ohren @ Castle Ultimate Studios (Oakland, CA), Abacrombie Ink, Advent, Ancient Age Studios, Azeron, Daniel Weyandt (Zao), The Final Cadence, Holy Mountain Printing, Mike Butler, Mike Chavez, Michael Grant & The Assassins, Mike Keel, The Press Recording Studio, Setrip, all the bands that shared the stage with us back in the day and all the friends & family that have kept the memory of the band alive and have supported us since the beginning. Thank you!

Held In Scorn is a pioneer of the heavier Swedish-inspired Melodic Death Metal and Metalcore out of Stockton, CA in the early 2000s. The band enjoyed regional success and garnered the interest of one-time CEO of Century Media Marco Barbieri.

Bandcamp Daily  your guide to the world of Bandcamp